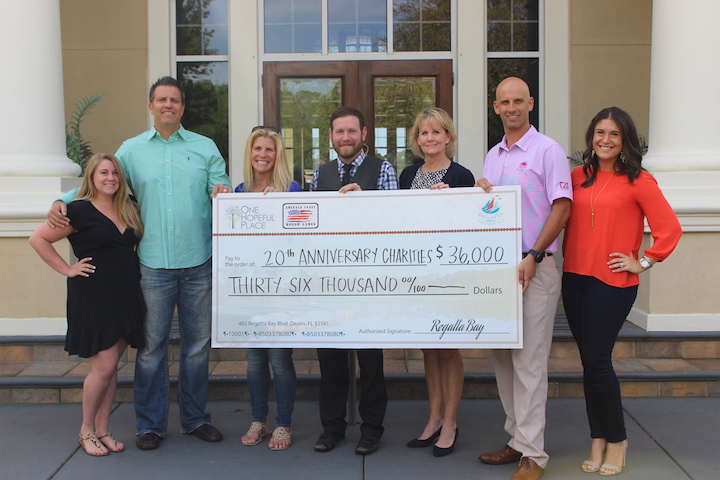 Hosted from March 15 through March 17, at Regatta Bay Golf & Yacht Club, the 20th Anniversary Celebration event drew crowds of over 300 in support of One Hopeful Place and Emerald Coast Honor Games. The funds raised by the 20th Anniversary Celebration will provide One Hopeful Place with $27,000 to help in their endeavor to build more facilities to aid homeless and will provide $9,000 to help Emerald Coast Honor Games in raising funds for defenders of the front line.

“Being a relatively new organization, having partnerships with groups like Regatta Bay is so pivotal to our continued success at One Hopeful Place,â€ says charity director, Nathan Monk. â€œWe are honored to have been a part of their 20th Anniversary Celebration. The event was able to raise a significant amount of money to help us continue to serve those who are experiencing homelessness in Okaloosa County. These dollars translate into lives that will be dramatically transformed through job placement and housing.”

â€œWhat an amazing weekend! I was taken aback by the support from Regatta Bay members and the community who came out this weekend to support two wonderful charities,â€ says Regatta Bay Golf & Yacht Club Head Professional, Mike Giammaresi. â€œI cannot say enough about how lucky we are here at Regatta Bay. We have an amazing golf course and a community that really shines for an event of this magnitude. There was an exciting atmosphere all weekend across the property; it made for a fun experience that will be remembered all year long. An event like this does not happen without the support of amazing sponsors, incredibly gracious celebrities, and a first-class staff. They all were an absolute privilege to work with, and I look forward to showcasing our venue for future events.â€