The concept of Regatta Bay was born in 1994. The developer, Legendary, and the landowner, The Coleman Kelly Testamentary Trust, wanted to create a world class residential, commercial, and golf community.Â  The idea was to create a lifestyle compatible with nature and surroundings that would enhance residential living and recreation along the Emerald Coast of Northwest Florida. Regatta Bay would be a development that offered mixed use development and communities, along with golf, tennis, shopping, boating, office and dining.Â  This concept has led the community of Regatta Bay to live by its mission, â€œLive, Shop, Dine, Play, Never Leave Regatta Bay.â€

In July of 1995 the team of consultants from multiple industries including golf, construction, engineering, architecture and land planning met in the offices of Legendary to launch the process. In 1996 the first home sites were sold, with new home construction following immediately thereafter. During this time, Robert Walker, former head design professional for Arnold Palmer Golf, worked with Legendary executives to plan, route, and develop the 6,900-yard golf course and in March of 1998 Regatta Bay Golf & Yacht Club opened for play to new members and the general public. From its inception, Regatta Bay has garnered accolades including â€œBest Golf Course on the Emerald Coastâ€ for over 12 years and one of Golf Digestâ€™s â€œ200 Best Courses in North America.â€ Today, the club has over 250 members and the public contributes over 25,000 golf rounds.

Over the past 23 years, in addition to world class golf, the Regatta Bay community has grown to include the worldâ€™s largest indoor boat storage facility, Destin Commons shopping center, Regatta Commons Office Park, Legacy on the Bay Apartments, LuLuâ€™s Destin, and Legendary Marine, one of the countryâ€™s largest boat dealerships. Today, Regatta Bay is still growing with 21 new homes under construction in the newest community, The Preserve, designed by Destin Custom Home Builders, and plans are underway for a new 65-unit housing development named Tradewinds.

â€œIt is such a tremendous milestone for us to have reached our 20-year anniversary,â€ said Regatta Bay Golf & Yacht Club Head Golf Professional, Mike Giammaresi. â€œThe community is the reason weâ€™ve grown throughout the years, so we felt it was imperative to give back to the community that has supported us for so long. One Hopeful Place and Emerald Coast Honor Games are two charities that deserve a tremendous amount of support, and itâ€™s our hope to raise a substantial amount of funds for them all while celebrating the 20th year of Regatta Bay Golf & Yacht Club.â€

OneÂ Hopeful Place is currently a 20-bed residential housing facility for men experiencing homelessness and veterans desiring to make a change in their lives.Â Their mission, to be the front door into permanent housing and to end the cycle of homelessness for those experiencing housing loss in Okaloosa County,Â is lived out every day with their Fort Walton Beach facility and their new 75-bed facility currently under construction.

The celebratory weekend will begin with the Parade of Homes and Champagne Toast on Thursday, March 15, 2018 with a parade of homes by Destin Custom Home Builders from 3 p.m. to 5 p.m. Participants will enter at the guard gate where they will receive a punch card notating the homes to visit. The Parade of Homes will conclude at the clubhouse of Regatta Bay Golf & Yacht Club, where the Champagne Toast and celebration will continue from 5 p.m. to 7 p.m. Guests will join area Chambers, the Regatta Bay Golf & Yacht Club team, and other community members to enjoy light bites, libations, and live music by David Seering. Those who successfully visit all of the homes with a full punch card or who donate $100 to the charities will be entered to win a plethora of lavish prizes. The Champagne Toast event, sponsored by Destin Custom Home Builders and Legendary Marine, will be open to the public and free to attend. 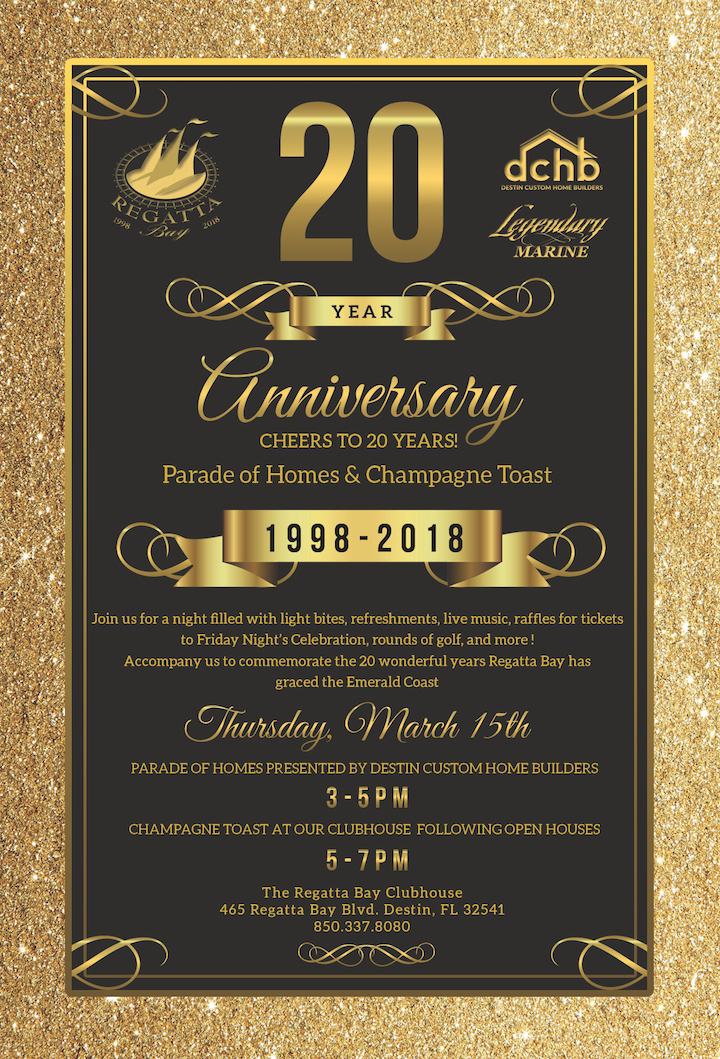 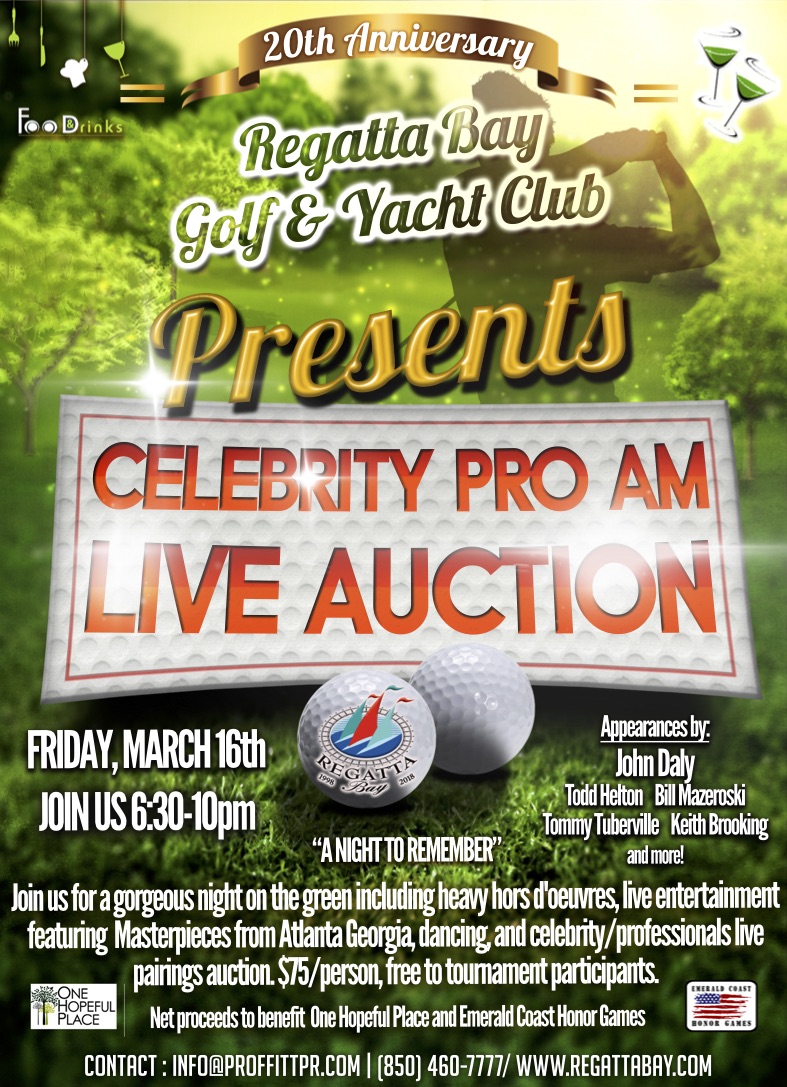 The main event, the Regatta Bay Golf & Yacht Club 20th Anniversary Celebration Celebrity Pro Am Golf Tournament, will take place on Saturday, March 17, 2018. Registration will begin at 9 a.m. with a shotgun start at 10 a.m. Entrance fees are $650 to the public, and $500 for Regatta Bay Golf & Yacht Club members to sign up individually, or $3,000 to sign up a foursome. All those participating in the golf tournament will choose a $470 retail value VIP tournament gift package option of their choice at the Friday night celebration sponsored by Callaway Golf. All tournament players will receive complimentary meals, cocktails, and an invitation to the after party and awards ceremony following the tournament at the Regatta Bay Clubhouse. The tournament and after party are open to the public. Golfers can register a team or individually by emailing Lexi@ProffittPR.com or at the Regatta Bay Clubhouse. 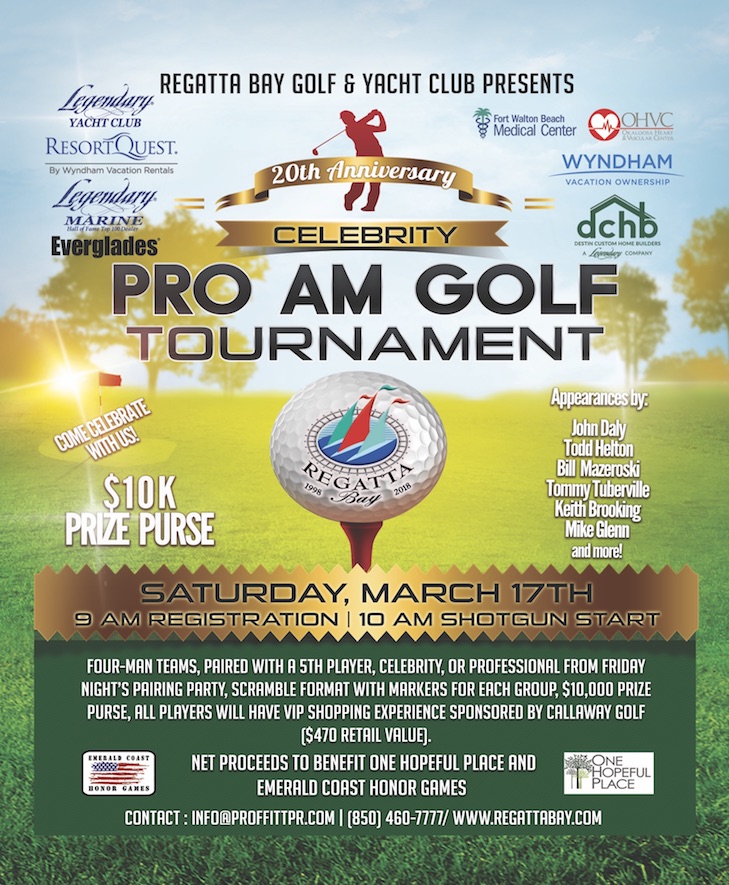 Sponsorships are selling rapidly and only few remain. For more information on sponsorship, volunteering, or to register to play, please contact Lexi Willcoxon at Lexi@ProffittPR.com or call (850) 460-7777.

About Regatta Bay
Regatta Bay is a private, gated community development in Destin, Florida. With a renowned golf course, shopping, dining, and boating all at the memberâ€™s fingertips, Regatta Bay leaves little to be desired. For more information call (850) 337-8080Â or go to www.regattabay.com. Regatta Bay Golf & Yacht Club can be found on Facebook, Twitter, Google+, and YouTube.