DESTIN, Fla. (November 14, 2016) â€“ Sister restaurants, Brotulaâ€™s Seafood House & Steamer and Jackacudas Seafood + Sushi in Destin joined forces to host a fundraiser for one of their very own employees. The Pink Party, benefitting Carrie Bair, was held Thursday, October 27, 2016, at Jackacudas at HarborWalk Village. A total of $12,050 was raised for the tenured employee and pivotal part of the Jackacudas family recently diagnosed with stage 1 Ductal carcinoma in situ (DCIS).

Having discovered a lump in her breast during pregnancy with her youngest son, Liam, which continued to grow after his birth, Bair sought the second opinion of her primary care physician who voiced immediate alarm by the size of the mass. Since undergoing a partial mastectomy and weeks of radiation, Carrie has continued to work throughout treatment.

â€œThe Pink Party was our opportunity to give back to someone who has continued to give so much to us and our community even through her struggles,â€ said Christopher Ruyan, co-owner of Brotulaâ€™s and Jackacudas.

â€œWe could not have done this without the support of this community and fellow businesses along the Emerald Coast,â€ said Tyler Jarvis, co-owner of Brotulaâ€™s and Jackacudas. â€œThe way everyone has rallied behind Carrie and the Bair family is a true testament to what a blessing it is to live and work in this area.â€

Bair is in the final stages of the remission process following her treatments. She continues to monitor her health, and encourages other women to do the same.

â€œStay in tune with your body and get checked regularly,â€ said Bair. â€œHad I not mentioned the lump to my doctor Iâ€™m not sure Iâ€™d be here now. Itâ€™s important for all women to be their own advocate.” 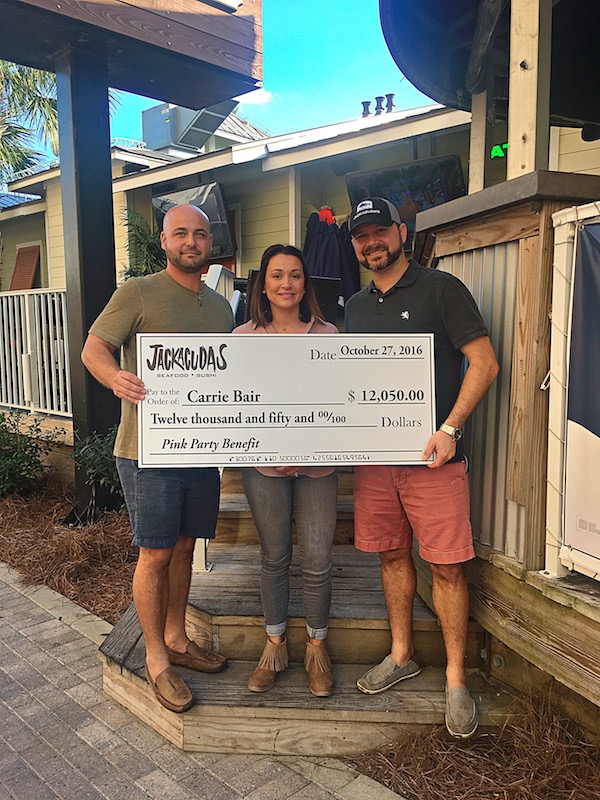 Photo Attached by Jessica Bracken. From L to R: